"We will vigorously prosecute anyone who provides, or even attempts to provide, support to terrorists," United States Attorney Matthew Schneider said in a press release issued by the Department of Justice. Link

Umm ... Does that include members of the Central Intelligence Agency?
Posted by Paul E. "Marbux" Merrell, J.D. at 1:53 PM No comments:

“Iran needs to recognize that the United States is not going to stand by while the [Mideast] region is destabilized or while people engage in overt warfare across lines — international boundaries — in other countries,” [U.S. Secretary of State  John] Kerry told PBS NewsHour.

He says, as the U.S. sends takfiri mercenaries into Syria to topple that nation's government.
Posted by Paul E. "Marbux" Merrell, J.D. at 3:18 PM No comments:

Putting a Torturer in Charge of the CIA?

Gina Haspel was nominated to head the U.S. Central Intelligence Agency. The U.S. Senate Select Committee on Intelligence is scheduled to question Ms. Haspel next week and is expected to recommend her confirmation to that post shortly thereafter. Here is the email I sent to U.S. Senator Jeff Merkley today:

I write to express my unwavering opposition to the nomination of Gina Haspel as Director of Central Intelligence. To have a Director so publicly associated with torture can only tarnish the reputation of our government and intensify distrust and fear of our nation throughout the world.

The Difference of the Two Major Parties 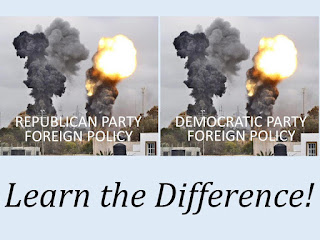 The nations of the world can be judged by the friends they keep. No nation can succeed, in the long run, by promoting rogue states, brutal tyrants, and murderous dictators.