U.S., Russia, and Ukraine: The Heartland

[Editor's note: This article began as a comment on an excellent article entitled, The Saker interviews Paul Craig Roberts. But because The Vineyard of the Saker is still shaking out the bugs from its new website, this was too long to be continued so I publish it here. I agree with Mr. Roberts on most points, but I disagree on his statement that U.S. "hostility toward Russia goes back to the Wolfowttz Doctrine."]

The U.S. government hostility to Russia and its interest in Ukraine demonstrably predate the Wolfowitz Doctrine. Bear in mind here that Barack Obama learned his geopolitics from the Russia-hating former National Security Advisor Zbigniew Brzezinski and still consults with him.

American foreign policy since World War II has been haunted by a pseudoscience called geopolitics with its corresponding geostrategy that attaches inordinate strategic importance to Eurasia. For an excellent and well-written critique of those concepts that should substantially aid understanding, see this thoroughly-referenced U.S. Army War College Quarterly paper by Christopher Fettweiss from 2000.

Like Henry Kissinger and McGeorge Bundy, Brzezinski is from the classical realist school of American foreign policy, heavily influenced by “godfather of containment” Nicholas Spykman and by his predecessor, the father of both geopolitics and geostrategy, Sir Halford John Mackinder, whose “Heartland Theory” was published in his 1904 paper, “The Geographical Pivot of History.” 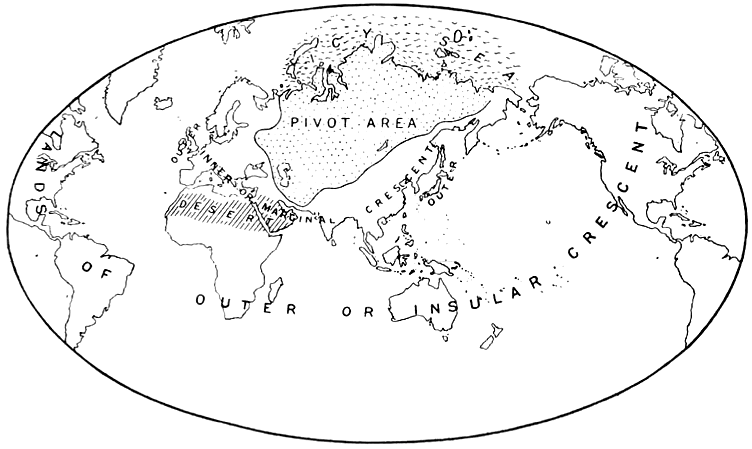 Mackinder posited that Russia had become militarily vulnerable because of the advent of railroads and that a “pivot” moment in history was at hand when railroads in Eurasia would supplant the mobility advantage previously held by naval powers. Because Eurasia was located at the military "center" of the connected land masses of Europe, Asia, and Africa, which formed a “World-Island,” military power would shift from the rim (naval power) to the center (the Eurasia “Heartland”). In 1919, Mackinder summarized his view and strategy of the coming age as:

Spykman, an American, in 1942 largely turned Macinder’s guiding principle on its head, positing that this concededly strategic area of Eurasia could be contained by projection of U.S. military might, a theory that he summarized as:

And there we can begin to see the policy wonk mindset behind NATO’s later eastward march to the borders of Russia, lending Ukraine enormous potential to become a Very Big Thing in U.S. foreign policy, justifying the risk of nuclear war, because Ukraine forms a large part of the southern portion, the soft underbelly of the Heartland itself. See e.g., the discussion of Brzezinski and Kissinger's writings on the strategic importance of Eurasia here.

Nazi Germany’s government may or may not have attempted to implement Mackinder’s Heartland Theory when it attacked the Soviet Union during World War II, as the War College paper explains, but the important factor is that U.S. policy wonks acquired the belief that the Nazis had rediscovered Mackinder’s “science” and were applying it to seize the Heartland. This was about the same time that Spykman's theory that the Heartland could be contained was published, a year after his death.

So when the Nazi government was defeated, U.S. policy wonks set about the business of "Containing Communism," a slogan and purpose perhaps invented by George Kennan in his early 1946 Long Telegram to conceal that a distorted view of geography rather than ideology provided the impetus. (Original telegram is here in PDF format.)

The power of the government occupying the Heartland must first be "contained," then pushed back from the hinterlands to which it had spread to the Heartland itself. Whether the power thus imprisoned was to be destroyed was put off to another day, but that desire certainly has surfaced among modern U.S. neocons, albeit in their vision the Russian government is to be overthrown from within by Democracy of the N.E.D.-Soros color revolution sort.

But from this "containment" policy, we can see the impetus for the Korean and Viet Nam wars as less concerned with communism as such and more concerned with the leaders of those nations' alignment with the power occupying the Heartland.

I first became aware that "containment" was a very big word when I abruptly found myself in a position of involuntary servitude dodging bullets in Viet Nam, "containing Communism" as a combat loudspeaker team leader for the U.S. Army's 8th Psychological Operations Battalion. For 27 months plus one day, I "contained Communism."

Only decades later did I discover that the "communism" portion of the phrase, "containment of communism," was mostly propaganda paint applied to the power relationship of the Vietnamese patriots' leader to the occupying government of the Heartland and to the government on the eastern rim of Asia, China.

The ideology of anti-communism, in my present view, had less to do with the war in Viet Nam than the equally flawed Heartland offspring of geographical determinism.

As discussed in the War College paper, whatever dubious relevance Macinder's "science" had to reality in 1904 was obsoleted by inter-contintental ballastic missiles, atomic bombs, and jets that can fly from the center of the U.S. to the opposite side of the world to drop their bombs before returning, not to mention the other amazing instruments of destruction developed to "contain" that Heartland. And for that geographic lunacy — that in fact was never more than a mental model for thinking about the world — millions of people have been killed, tens of millions have been maimed, and untold millions have fled for their lives.

That is not the only reason Mr. Obama is a highly violent and ruthless person of course. After all, very large fortunes must be accumulated and natural resources must be exploited. But virtually all recent U.S. wars, both overt and by proxy — other than the Ukraine and other nations bordering Russia — can be conveniently classified under Mackinder's three imperatives of imperial geostrategy; to prevent collusion and maintain security dependence among the vassals; to keep tributaries pliant and protected; and to keep the barbarians from coming together.

Of course I have drastically over-simplified matters discussed above. A multitude of contributing factors go into any war and certainly blocking the integration of the Asian and European markets must rank high in Ukraine.

There is no doubt that the so-called Wolfowitz Doctrine magnified the appearance of hostility toward Russia. But I see that Doctrine as more about providing political justification for bloating military budgets despite the end of the Cold War than it is about hostility to Russia. It ain't about Russia qua Russia. It's still about control of the Heartland.

Nb., classic realism is one of many competing ideologies (some say philosophies) not invariably tied to reality, as the history discussed above shows. See generally, this article by Charles Strohmer. But it has been the mostly dominant ideology in U.S. foreign policy since World War II.